“We have only to look at the force of one of the Opens…to feel the complexity of observation the painter requires of himself and the viewer.” *
“…a subtle but firmly asserted spatial ambiguity that gives the picture a deep resonance and an aura of mystery.”**
Andrea Rosen Gallery is delighted to announce a comprehensive exhibition of Robert Motherwell’s seminal Open series. The gallery has an ongoing commitment to timely presentations of historical material, in this case highlighting a point in the artist’s trajectory when a confluence of institutional, intellectual, and market attention brings renewed appreciation to a significant body of work. The gallery is particularly interested in creating historical exhibitions that expand the reading and understanding of an artist’s work. While Motherwell’s significance may have been perceived primarily through the gestural Elegies, presenting the Opens now not only allows us to compare these masterworks against the present-day focus on abstraction, but also encourages us to reconcile the breadth of Motherwell’s rigor and clarity. They are undeniably fresh, beautiful, and bold.
Typically composed as single-color surfaces on which he has painted three charcoal lines, the Opens were a primary occupation for Motherwell from 1967 through the 1970s, and briefly into the 1980s. Although it has been common practice to locate Motherwell alternately within the histories of midcentury American painting and Minimalism, the Opens exemplify the cerebral, content-fueled character that sets his work apart: the fragmentary rectangles offer an intense conceptual engagement with dualities of interior and exterior, and with perceptions of nature and space.
Coinciding with the centennial of Motherwell’s birth, the exhibition comes amid a groundswell of appreciation of his significance. In 2012, the Dedalus Foundation (founded by Motherwell in 1981) and Yale University Press published a major catalogue raisonné of Motherwell’s work. The Art Gallery of Ontario and The Solomon R. Guggenheim Foundation in New York have also produced remarkable studies on Motherwell in recent years, and the Opens themselves are the subject of a dedicated collection of essays and scholarly criticism published in 2010. In February of this year, the Metropolitan Museum of Art in New York opened an exhibition of Motherwell’s monumental paintings, collages, prints, and illustrated books drawn from its holdings and those of the Dedalus Foundation.
*Mary Ann Caws
** Jack Flam
Robert Motherwell, a central figure in twentieth-century painting who coined the name “The New York School,” was born in Aberdeen, Washington, on January 24, 1915. He graduated from Stanford University in 1937 and undertook graduate coursework first at Harvard University, then at Columbia University, where Meyer Schapiro encouraged him to devote himself to painting rather than scholarship. Motherwell had his first solo exhibition at Peggy Guggenheim’s Art of This Century gallery in 1944; by the mid-1940s he had become the leading spokesperson for avant-garde art in America. Throughout his life, Motherwell taught and lectured extensively, and exhibited widely at museums in the United States and Europe. In 1965, The Museum of Modern Art, New York held a major retrospective of his work that subsequently traveled to Amsterdam, London, Brussels, Essen, and Turin. Throughout the 1970s and 1980s, he had important retrospective exhibitions in a number of European cities, including Düsseldorf, Stockholm, Vienna, Paris, Edinburgh, and London. In 1977, Motherwell was given a major mural commission for the new wing of the National Gallery of Art, Washington, D.C. A retrospective of one hundred major works was organized by the Albright-Knox Art Gallery, Buffalo, NY, in 1983 and subsequently traveled to The Los Angeles County Museum of Art; The San Francisco Museum of Modern Art; The Seattle Art Museum; the Corcoran Gallery of Art, Washington, D.C.; and The Solomon R. Guggenheim Museum, New York. Robert Motherwell died in Provincetown, Massachusetts, on July 16, 1991.
Works from Robert Motherwell’s Open series are in the collections of major international institutions including Albright Knox Gallery, Buffalo, NY; The Art Institute of Chicago; The Guggenheim Museum, Bilbao; The Los Angeles County Museum of Art; the Menil Collection, Houston, TX; The Metropolitan Museum of Art, New York; The Museum of Modern Art, New York; the Modern Art Museum of Fort Worth; the San Francisco Museum of Modern Art; The National Gallery of Art, Washington, D.C.; and The Whitney Museum of American Art, New York. 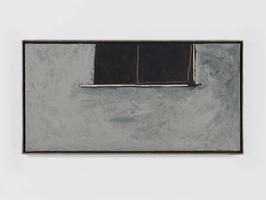 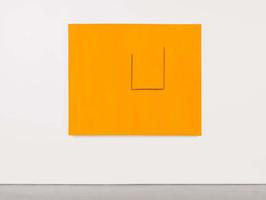 Untitled (In Orange with Charcoal Lines) 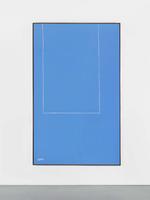 Open No. 18: In Ultramarine with White Line 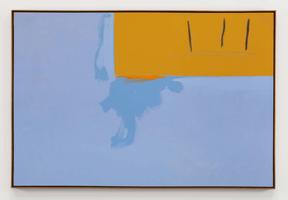 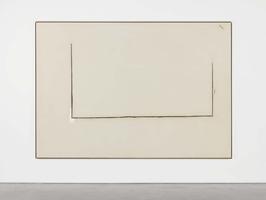 Open No. 22: In Charcoal with White 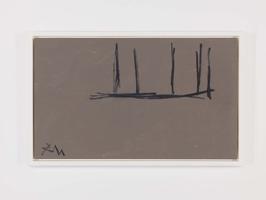 Open Study in Charcoal on Grey No. 1 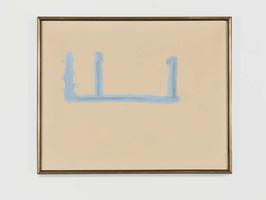 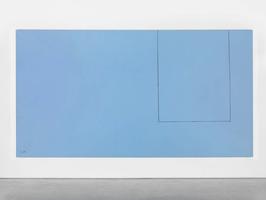 Open No. 16 in Ultramarine with Charcoal Line 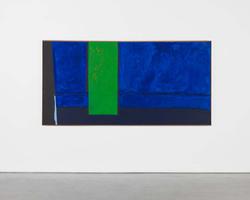 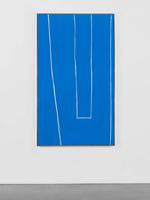 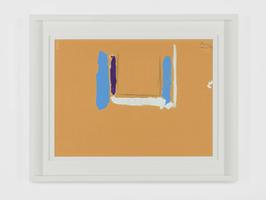 Open Study with Blue and White No. 2 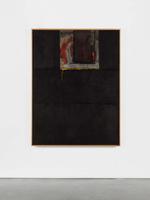 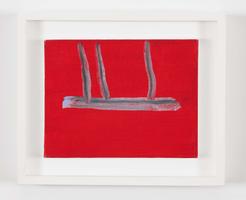