Andrea Rosen Gallery is pleased to present an intimate exhibition of significant collage works by Robert Motherwell spanning the most prolific period of the artist’s collage practice from the late 1950s to the late 1970s. It is a particularly apt time to examine this body of work as there has been increased in depth attention on the artist with the concurrent Elegy exhibition at Dominique Levy Gallery, and earlier this year the Lyric Suite drawing exhibition at the Metropolitan Museum of Art and the Opens painting exhibition at Andrea Rosen Gallery.

The practice of collage was one that Motherwell visited often throughout his career, and is reflective of the evolution of Motherwell’s oeuvre, from the emotionally charged expressionistic collages of the 1940s to the serene and minimal compositions of the 1970s, as well as the artist’s dichotomous relationship with automatism and formalism. The collages are often credited as the conduit of experimentation that led to the most famous series of his painting career, the Elegies and Opens, and the bounty of his printmaking practice later in his career. Beyond their generative practicality, the collages gave Motherwell a different mode of expression, one that was far more intimate, playful, and autobiographical. Using elements from the tangible world such a artists’ materials, travel ephemera, tobacco and wine labels allowed Motherwell to construct a narrative for the viewer while still maintaining his automatic and gestural style of painting.

Motherwell famously said that he considered collage the greatest creative innovation of the 20th century, reflective of the disjointedness of the modern industrial era. This body of work functions as a bridge between his Dada and Cubist predecessors, whom he idolized and paid homage to through the cultural allusions of his materials, and his Pop and Minimalist contemporaries exploring the ideas of seriality and commercialization. The artistic concepts these collages pioneered, particularly the reclamation of images with personal and popular implication continue to be employed by artists working well into the 21st century using new technologies.

Robert Motherwell, a central figure in twentieth-century painting who coined the name “The New York School,” was born in Aberdeen, Washington, on January 24, 1915. He graduated from Stanford University in 1937 and undertook graduate coursework at Harvard University and Columbia University. Motherwell had his first solo exhibition at Peggy Guggenheim’s Art of This Century Gallery in 1944; by the mid-1940s he had become the leading spokesperson for avant-garde art in America. Throughout his life, Motherwell taught and lectured extensively, and exhibited widely at museums in the United States and Europe, with major retrospective exhibitions in New York, Los Angeles, San Francisco, Seattle, Washington, D.C., London, Edinburgh, Brussels, Amsterdam, Düsseldorf, Stockholm, Vienna, Paris, and Turin. Robert Motherwell died in Provincetown, Massachusetts, on July 16, 1991. 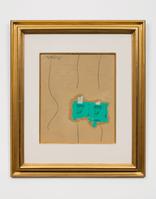 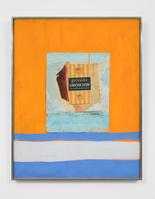 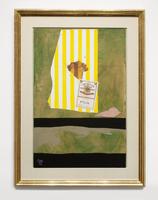 In White and Blue on Grey 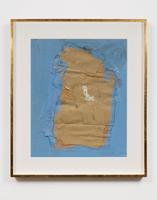 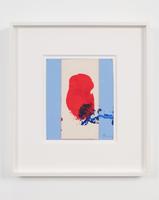 Gauloises on Scarlet over Yellow No. 2