Andrea Rosen Gallery is thrilled to present the first New York solo exhibition by Simon Fujiwara, a young artist who has achieved exceptional recognition and acclaim across Europe and Asia, with forthcoming shows at the Irish Museum of Modern Art, Palais de Tokyo, Mori Art Museum and recent solo exhibitions at Tate St Ives (2012), and at the Stoschek Collection, Düsseldorf (2010). He is known for his autobiographical explorations of identity and sexuality that blend fact and fiction into rich, absorbing narratives. His complex installations incorporate sculpture, performance, video and photographic elements to create fully imagined scenarios that underscore the interdependence of personal history and more universal narratives.

Studio Pietà (King Kong Komplex) debuted at the Sharjah Biennial in March and will be presented in a newly expanded format at Andrea Rosen Gallery. It details the artist's attempt to re-stage a lost photograph remembered from childhood of his bikini-clad British mother held in the arms of a former Lebanese boyfriend and taken on a beach close to the famous Casino du Liban outside of Beirut where she worked as a cabaret dancer in the late 1960s. Beginning as an attempt to simply reconstruct the photograph, the artist’s role as director – casting the models, designing the set and even the make-up selection – soon draws him into a labyrinth of larger social and political questions about racial profiling, exoticism, terrorism, and sexual identity.

In the video component at the heart of Studio Pietà, Fujiwara uses the intimate framework of an interview session with himself as leverage to foster a discussion about historical and contemporary relations between the West and the Middle East. The accompanying installation – a surrealistic combination of photographer’s studio, casting room, interrogation cell and Beirut beach – is as theatrical as it is sinister. The series of photographic prints of the photo shoot capture the artificial and absurd aspects of Fujiwara’s original proposition to recreate the missing picture.

Although Studio Pietà includes autobiographical components, the details of Fujiwara’s narrative are unverifiable and vague. The terms of the problem are interchangeable and an erotic undercurrent hints at the generalizing quality of desire: the artist remembers feeling envy upon seeing his mother’s photograph, an unexpressed attraction to the man in the image that remains unresolved in the installation. This allegedly personal element − a story about the artist’s family − is not a sentimental activation of biography, but rather a formal investigation into a set of conventions whose familiarity allows the artist to broach difficult political and social issues without presupposing a kind of authority or jurisdiction.

Born in 1982 in London, Simon Fujiwara spent his childhood between Japan, England, Spain and Africa. In January 2012, Tate St Ives hosted his first major solo survey exhibition ‘Since 1982’ which was held in his hometown of St Ives and accordingly featured six of his key autobiographically charged installations. In 2011 Berlin’s Hebbel am Ufer theatre showed his first theatre work The Boy Who Cried Wolf which incorporated three of his acclaimed performances into a full three-act play which subsequently toured to New York’s Performa 11 Biennale and San Francisco’s Museum of Modern Art. His works have been shown in solo and group exhibitions around the world including Toronto’s Power Plant, New York’s MoMA, Artonje Centre, Seoul, and Tokyo’s Museum of Contemporary Art and at the Venice Biennale, Sao Paulo Biennale, Shanghai Biennale among others. His installations are in museums and foundation collections including the Hamburger Kunsthalle, Hamburg, Prada Foundation, Milan and the Tate collection, London. In 2010 he was awarded the prestigious Baloise-Art Prize at Art Basel and the Cartier Award at Frieze Art Fair. He has published two artist’s books, The Museum of Incest and 1982. 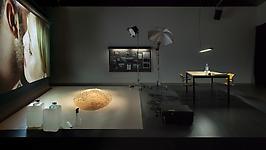