Andrea Rosen Gallery is thrilled to announce an exhibition of Stan VanDerBeek (d. 1984), whose visionary approach to art making was not only radical in his time, but is also increasingly reflective of a contemporary discourse around the integration of media, technology, and everyday life.

Featuring five of eight computer-animated films that comprise the artist’s seminal Poemfield series (1966-1971), as well as a small selection of related computer graphic prints on paper, this presentation illuminates a significant pillar of the gallery’s ongoing mission to re-engage historical work within contemporary contexts.

VanDerBeek first worked on Poemfield at Bell Laboratories in Murray Hill, New Jersey and then as an artist-in-residence at MIT’s Center for Advanced Visual Studies in Cambridge, Massachusetts. Originally conceived as a multi-screen installation, Poemfield was eventually included in VanDerBeek’s ambitious, moving image and sound environments such as Movie-Drome and Cine Dreams. In each individual film, powerful sequences of words gradually emerge from, and back into, kinetic mosaics of glittering geometric graphics.  The images seen within each projection are the visual manifestations of unique poems written in a specific computer language, then processed by an IBM 7094, and ultimately output onto the surface of a cathode ray tube and filmed.

As a pioneer collaboration between artists and scientists, Poemfield was realized by VanDerBeek with the Bell Labs computer programmer and physicist Ken Knowlton. One of several programs developed by Knowlton, BEFLIX (short for Bell Labs Flicks), was used to make Poemfield and is considered by AT&T as one of the first computer animation languages.

VanDerBeek also collaborated with musicians John Cage and Paul Motian on some of the varied soundtracks that accompany the films, as well as with filmmakers Robert Brown and Frank Olvey to create profound interplays of intense color. As equal combination of text, image, motion, sound, and color, each Poemfield is, in itself, a multilayered, image experience of the kind for which VanDerBeek is best known.

VanDerBeek’s belief in the computer as an extension of the mind kept him pursuing technology as a revolutionary means of expressing and engaging human consciousness and, for that reason, a necessary tool for an artist to master. Representative of his continued experimentation with computer language, one black and one uncolored, embossed print of a computer graphic used in Poemfield minimally preface one’s entrance into the main gallery where Poemfield No.1, No. 2, No.3, No.5, and No.7 vibrantly and loudly pulsate across surrounding walls. Two differently colored versions of Poemfield No. 1, as well as Poemfield No. 2, have been restored in high definition, the latter of which will be shown here in the gallery for the first time.

This exhibition was organized with the Estate of Stan VanDerBeek 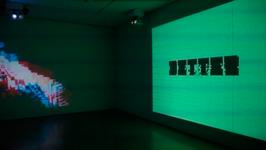 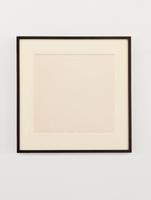