Andrea Rosen Gallery is delighted to announce its representation of the Estate of Alina Szapocznikow.

This Fall, the gallery will present its first solo exhibition of her work, (October 30th – December 5th) with a meticulously chosen group of major figurative sculptures from the 1960s and 1970s, contextualized with drawings and works from the “Souvenir” series.

Widely regarded as one the most influential and significant artists to have risen to prominence in post-war Poland and Paris, Alina Szapocznikow (1926-1973), within a period of fifteen years (1955-1972), helped to deconstruct and re-imagine traditional sculpture, solidifying her pioneering vision of the human body, and her distinctive hybrid of the organic and inorganic. Szapocznikow’s intimate works take the form of drawings, sculptures and photographs, often with imprints and casts of the human body. Through the study of her work, one can touch upon cornerstones of contemporary art, and some of the most relevant social and historical events of the past 70 years. While her individual significance has always been remarkable, Szapocznikow’s unique oeuvre is now clearly interwoven into the canon of art history.

“As minimalism became the default visual language of contemporary art, there was a shift where all things scatological became almost suppressed. With the help of artists like Paul McCarthy and Mike Kelley, we now live in a more pluralistic aesthetic time, within which we can again see Szapocznikow’s incredible significance.” – Andrea Rosen.

Szapocznikow has had seven major international exhibitions in the past four years. Highlights include the first comprehensive retrospective that traveled to the Museum of Modern Art, New York; the Hammer Museum, Los Angeles; WIELS Contemporary Art Centre, Brussels; the Wexner Center for the Arts, Columbus (2011-2012); and a major survey at the Centre Georges Pompidou, Paris (2012).

A significant part of the gallery’s program is the stewardship of a number of artist Estates including the Estate of Felix Gonzalez-Torres, Tetsumi Kudo, Walker Evans, and László Moholy-Nagy.

Alina Szapocznikow was born in 1926 in Kalisz, Poland. After surviving three concentration camps during WWII, she trained at studios in Prague and the École des Beaux-arts in Paris. She first began showing her work in 1950 and held her first two-person show at the Zacheta National Gallery of Art, Warsaw, in 1957. Szapocznikow, along with two other artists, was selected to represent Poland at the Venice Biennale in 1962. A year later, she moved to Paris, where she continued to live until her untimely death in 1973 at the age of 47. Her work is in the public collections of the Centre Pompidou, Paris; Hammer Museum, Los Angeles; Israel Museum, Jerusalem; Museum of Contemporary Art, Los Angeles; Museum of Modern Art, New York; Philadelphia Museum Art; and Tate, London, as well as numerous institutions across Poland and Western Europe. Important solo exhibitions include: WIELS Contemporary Art Center Brussels/ Hammer Museum, Los Angeles/Museum of Modern Art, New York, and Wexner Center for the Arts, Columbus; the Tel Aviv Museum, Bonniers Konsthall, Musée d'Art Moderne de la Ville de Paris, the Stedelijk Museum, Amsterdam, Kunsthalle Basel, Camden Arts Centre, London, and the National Museum of Warsaw. Recent group shows this summer include “THEM” at the Schinkel Pavillion; Danh Vo and Caroline Bourgeois’s “The Slip of the Tongue,” at Punta Della Dogana, and Massimiliono Gioni’s “La Grand Madre,” at Fondazione Nicola Trussardi. 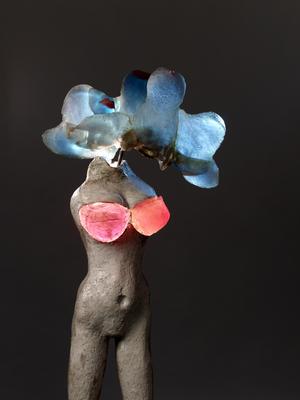