José Lerma at the Museum of Contemporary Art Chicago

Born in Spain, raised in Puerto Rico, and now living in New York and Chicago, artist José Lerma is best known for producing playful, intricately rendered portraits of long-lost historical figures. In recent years, he has expanded his painting practice to include repurposing nontraditional materials such as reflective fabric and industrial carpet, and incorporate found objects such as electric keyboards and military parachutes. In dialogue with changing artistic practices over the past decade, Lerma not only explores various uses of materials for his paintings but also mulls over the medium’s relationship to history with a capital “H.”

For the artist’s first show at MCA Chicago, Lerma presents a new body of work inspired in part by an engraving by eighteenth-century artist Pietro Antonio Martini, The Exhibition at the Salon du Louvre in 1787. The print depicts the public onlookers of the Salon without any context or artworks in the background. In this project, Lerma investigates shifting relationships among the public, artists, and patrons, creating one of his most ambitious so-called “keyboard paintings” to date. In Parterre, named after the open space near the front of the stage where half the audience stood during a theater production, Lerma takes the figures from Martini’s print and compresses them to create his own “audience” within the work. Made with a fine-point airbrush technique that resembles ballpoint pen, the resulting stretched, epic-scale canvas rests on two electric keyboards, which produces a droning soundtrack. In turn, it forms a tongue-in-cheek reference to the metaphoric weight of painting’s history on contemporary artists.
Similar to his earlier practice of creating artworks with whatever he could find at a particular site, the artist chose to create a series of portraits for this exhibition based upon the corresponding patron or sponsor of each of the three discrete areas in the BMO Harris Bank Chicago Works galleries, including sculptural busts made of photography backdrop paper, massive carpet paintings, and experimental keyboard paintings on mylar. Building from his previous works on the subject of monetary iconography and bankers, he created an ambitious gallery-size carpet painting of the founders and first presidents of the merger (Bank of Montréal and N. W. Harris & Co., the predecessor of Harris Bank) that now comprise BMO Harris Bank. Titled Portrait of Norman and John, the artist carefully painted sections of carpet that he then assembled to create a monumental portrait on the floor. Continuing to use context as content, Lerma reflects upon the complex relationships between artist, patron, public, and site.
This exhibition is organized by Kristin Korolowicz, Marjorie Susman Curatorial Fellow at the Museum of Contemporary Art Chicago. 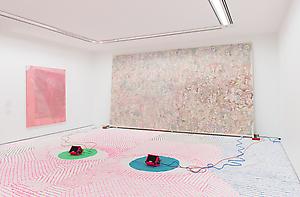