In this exhibition, the sculptural installations and wall works refer to the political dimension of early modernist display architecture and design between World War I and II in Weimar Germany while simultaneously creating a window into our contemporary consumer society. The exhibition will feature a new stainless steel vitrine that pays homage to the modernist architecture of Ludwig Mies van der Rohe who was born in Aachen in 1886. Additionally, Meckseper’s wall works, made out of store display slatwall panels and printed canvases, highlight appropriated advertisings such as the packaging of male underwear labels 2(X)ist.

The installation Sabotage on Auto Assembly Line to Slow it Down, is a mirrored platform featuring three car tires on a chrome conveyor belt alongside two videos shown on stacked television monitors. One of the videos is a continuous image of a shattered screen, while the other, is a montage of hawkish car advertisements that flooded the US airwaves in early 2008. This work points out the instability of capitalism and Post-Fordian society. The title refers to the term Slowdown, an industrial action in which workers reduce productivity and efficiency- a measure that is seen as less risky and costly for workers and unions than a real strike.

The works in the exhibition create a sense of an archeology of the present and the early 20th century. A sense of instability haunts the mirrored surfaces and the seemingly benign objects reflected in them, as if the reason for their existence is the anticipation of their own destruction. 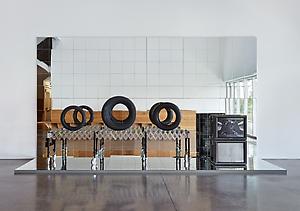