Sculptor, performance artist, writer and filmmaker Josiah McElheny has been appointed for this semester as Cornell’s first Teiger Mentor in the Arts.
McElheny is based in New York City and is best known for his use of glass with other materials. He received a MacArthur Fellowship “Genius Award” in 2006. His work was the subject of two major survey exhibitions in 2012 and 2013, at the Institute of Contemporary Art in Boston, and at the Wexner Center for the Arts at Ohio State University. He is widely published, including writing for Artforum and Cabinet magazines, and is a contributing editor at Bomb Magazine. Since 2001 he has been a senior critic in sculpture at the Yale School of Art
McElheny will give a public lecture on October 7 at 5:15 p.m. in the Abby and Howard Milstein Auditorium in Milstein Hall at Cornell University. 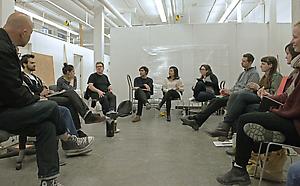