Andrea Rosen Gallery is delighted to announce the representation of Simon Fujiwara. United by a common sense of formal and conceptual rigor, the artists in the gallery's program are each defined by having a distinct territory.  "I have been following Simon's work for a number of years," Rosen says, "and I am so pleased that his success is a reflection of the singular point of view in his practice. I am always impressed by the way his work is able to simultaneously hold both content and mystery."  The addition of new artists to the program is always incredibly exciting. At this time, the development of new artist relationships is an essential part of gallery's agenda and we look forward to sharing additional exciting news soon.

Simon Fujiwara (b. 1982 in London, lives and works in Berlin) is one of the most important artists of his generation.  In his ambitious and diverse practice, he works intuitively across performance, painting, video, sculpture, and installation.  Fujiwara's work deploys the power of art to sustain rather than explain the mysteries of the human condition. In his hands, people, technology, images, and objects are the tools used to paint a compelling and fragmented portrait of the 21st century.

Fujiwara's well known early performances and videos were marked by their distinctly rich and often contradictory narratives that centered around his biography and personal experiences. Housed within sophisticated sculptural installations, his spoken word performances oscillate between extreme didacticism and poetry, ultimately serving to undermine our belief in language as a form of communication in the age of over-sharing.

In his recent works such as New Pompidou (2014) a reimagining of the famous museum as a biological organism or Masks (Merkel) (2015 - present) - abstract paintings made with the make up of German chancellor Angela Merkel - Fujiwara explores how systems as seemingly divergent as the political, the biological, and the industrial all work to structure the personal. His works reveal how superficial attempts at individuation are ultimately all played out in structures aimed at limiting a truly complex, multivalent, and open construction of the self. Rather than accepting the impossibility of individual agency, Fujiwara's work insists on the power of the individual in an increasingly corporatized, global world.

In January 2016, Fujiwara will open exhibitions at the Obayashi Foundation, Tokyo and a comprehensive, survey exhibition at the Tokyo Opera City Art Gallery. Fujiwara recently had a major contribution to the Nouveau festival at the Centre Pompidou, Paris and significant institutional exhibitions at Tate St. Ives; The Hayward Gallery, London; The Julia Stoschek Collection, Düsseldorf; the Carpenter Center for the Visual Arts, Harvard University, Cambridge; and Kunstverein Braunschweig. His work has been presented at the Venice Biennale, São Paulo Biennial, Gwangju Biennial, Shanghai Biennial, and Sharjah Biennial, and Performa. His works is in the collections of the Museum of Modern Art, New York; the Guggenheim, New York; Tate, London; Hamburger Kunsthalle, Hamburg; Sammlung Verbund, Vienna; the Sharjah Art Foundation, and the Leeds Art Gallery. In 2013, the gallery had the great pleasure of presenting Fujiwara's first one-person exhibition in New York and with this new relationship, we look forward to deepening our engagement with Fujiwara's work and introducing his remarkable practice to new audiences. 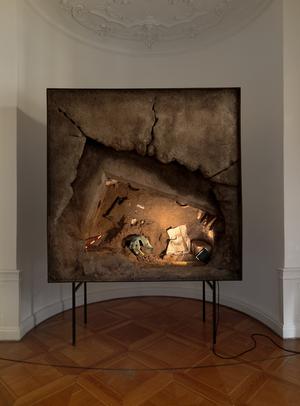