Carl Andre (born 1935) was a poet before he was an artist, and between 1960 and 1965 he produced a substantial body of innovative visual poetry. Arranging language on paper as carefully and as sculpturally as he was later to arrange pieces of metal or bricks on the floor, Andre approached words as adjustable entities, to be moved around within the limits of the space of the sheet of paper. These works, made during the height of the international Concrete poetry movement, appeared alongside his sculptures in exhibitions and were excerpted in scholarly writings about the artist. With this volume, Andre’s influential poetic oeuvre is now gathered comprehensively for the first time. The poems, which were often typed on 8 x 11 paper, are reproduced in quasi-facsimile, to convey Andre’s sculptural intentions. Also included are essays by art historians Gavin Delahunty and Valérie Mavridorakis, and curator Lynn Kost. 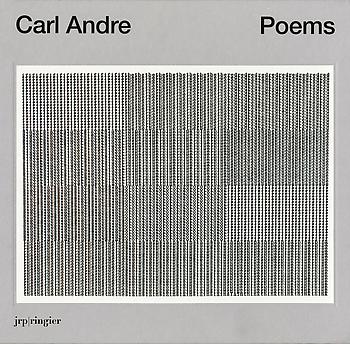