Ryan Trecartin: Any Ever

“What [Trecartin] has unleashed is larger than himself, which is why both his sudden appearance and continuing evolution are such cause for hope.”—Roberta Smith, New York Times

“The most consequential artist to have emerged since the nineteen-eighties, he is being hailed as the magus of the Internet century.” –Peter Schjeldahl, The New Yorker

Since the debut of his first feature-length video, the 2004 A Family Finds Entertainment, Ryan Trecartin (b. 1981) has been hailed as one of the most exciting artists of his generation. His movies layer the visual and the aural in virtuosic combinations of color, form, drama, and montage to produce a sublime, stream-of-consciousness effect that feels bewilderingly true to life. This volume, the first monograph on Trecartin, includes extended illustrated sections on his seven-part epic Any Ever, 2009–10, as well as I-Be Area, 2007, and A Family Finds Entertainment. A trio of essays by curators Lauren Cornell, Kevin McGarry, and Linda Norden focus on Trecartin’s repurposing of language, his open-source approach to personality and gender, and his extended amplifications of consumer culture. An interview with Trecartin by artist Cindy Sherman provides a revealing glimpse into his collaborative process. 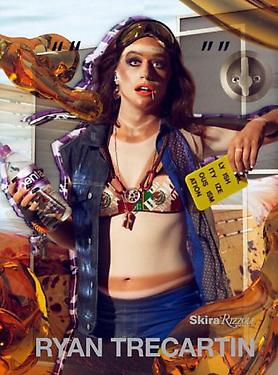