Sharon Hayes: There's So Much I Want to Say to You

In her performances, videos, and installations, Sharon Hayes (b. 1970) explores the nexus between politics, history, speech, and desire. Her works modify or appropriate the language and tools of political dissent, creating unexpected affinities between important historical events and the present. Highlighted in this volume is the video installation Symbionese Liberation Army (SLA) Screeds #13, 16, 20 & 29 (2003)—a work in which Hayes memorized the famous taped speeches by Patty Hearst and her kidnappers, the leftist radical group the Symbionese Liberation Army, and then reads them to an audience who corrects her mistakes. It is in these slippages between memory and history that the meaning of Hayes's work resides. This book also includes a group of new site-specific works that addresses the Whitney's role in the historic development of process-based, performative art and its engagement with politics that took place in the late 1960s and early 1970s. 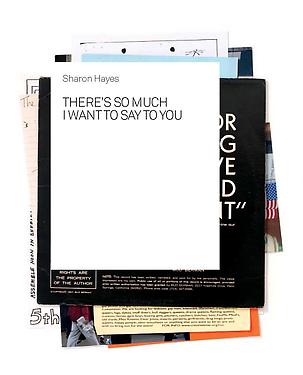