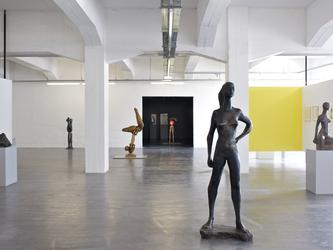 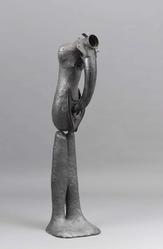 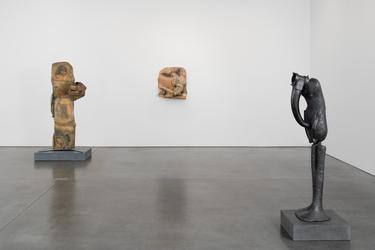 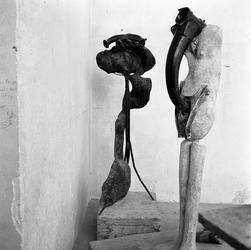 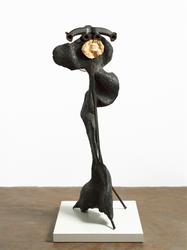 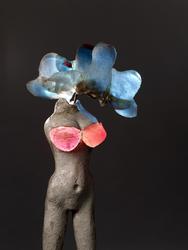 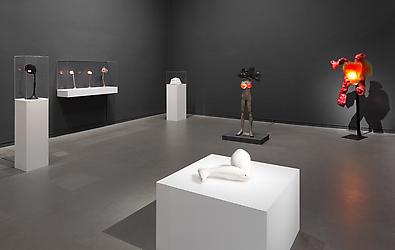 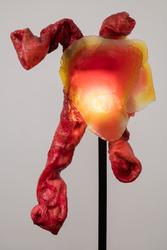 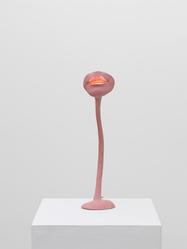 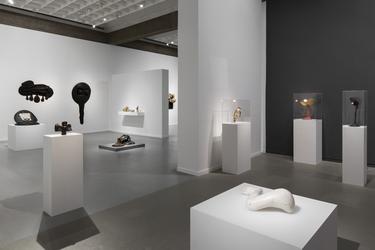 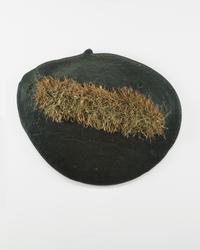 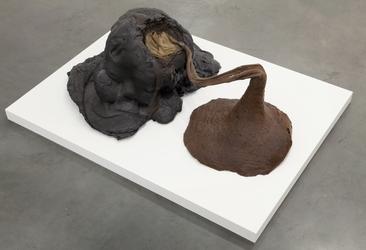 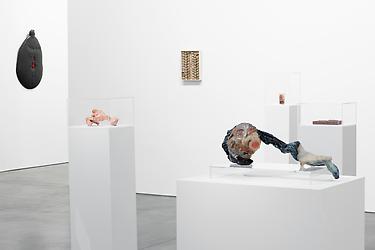 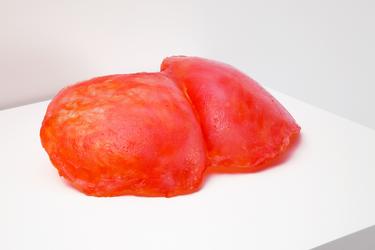 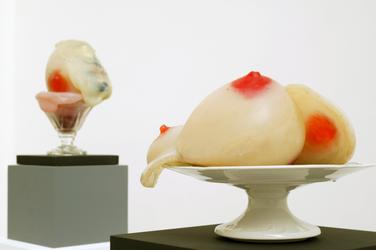 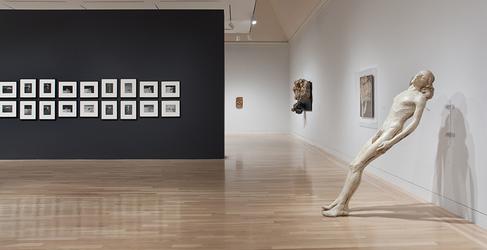 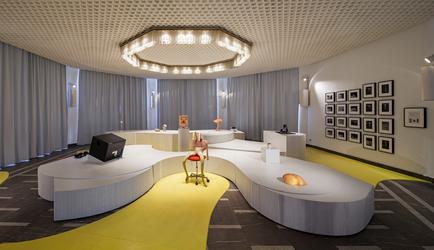 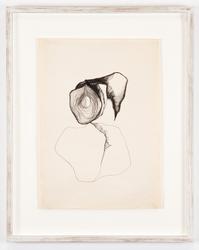 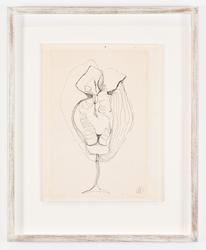 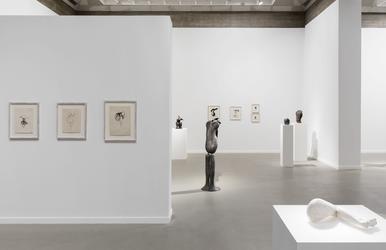 Widely regarded as one the most influential and significant artists in post-war Poland and Paris, Alina Szapocznikow (1926-1973) has helped to deconstruct and re-imagine traditional sculpture, solidifying her pioneering vision of the human body, and her distinctively radical hybrids of the organic and inorganic. At once seductive and unsettling, Szapocznikow's intimate works take the form of drawings, photographs, and sculptures often made from direct impressions and casts of body parts, each an attempt to fix the traces of the body and record the fleeting moments and absurd paradoxes of life. Incorporating  a completely new set of materials––from tinted polyester resin and polyeurethane foam to everyday materials such as pantyhose, newspaper clippings, and grass––her works embrace both material rigor as well as her own deeply personal psychology. As a vessel for memory and formal innovation, Szapocznikow’s work links the intensely personal to our greater humanity.

Alina Szapocznikow was born in 1926 in Kalisz, Poland, and died in 1973 at the age of 47. After surviving the Second World War in concentration camps with her mother, in 1947, she moved to Prague where she studied sculpture in the studio of Otto Wagner, among others, and later studied at the Ecole de Beaux Arts, Paris in 1949. After returning to Poland in 1951, Szapocznikow represented Poland in the 1962 Venice Biennale, thereafter moving back to Paris, fully formed, at a historically vital time, when artists from Marcel Duchamp to Yves Klein were simultaneously developing pivotal territories propelled out of Formalism. Following her death, several exhibitions of her work were held in Warsaw and Paris, however in recent years, Szapocznikow has been recognized by numerous major international exhibitions, including the first comprehensive retrospective that traveled to the Museum of Modern Art, New York; Hammer Museum, Los Angeles; WIELS Contemporary Art Centre, Brussels; and the Wexner Center for the Arts, Columbus (2011-2012); as well as a major survey at the Centre Georges Pompidou, Paris (2012).

Drawing on the work of prominent art historians, curators, critics, and collectors, this exhibition catalogue presents the most current research on the work of Alina Szapocznikow.

Born in Kalisz, Poland, in 1926, Szapocznikow studied in Prague and Paris, spent the last decade of her life in France, and created an impressive number of sculptures and drawings that are now defined as post-surrealist and proto-feminist. Recent exhibitions of the artist’s work in Germany and France, along with acquisitions by prominent collections worldwide, have bolstered Szapocznikow’s international reputation and ignited discussion of her significance to twentieth-century art.

Jewish sculptor and proto-feminist  Alina Szapocznikow (1926, Kalisz– 1973, Paris) was one of Poland’s outstanding post-WWII artists. Within two decades, she exchanged the language of classical sculpture with an idiosyncratic lexicon of new shapes, unusual materials, processes and themes that held a dialogue with the contemporary art scene and her own biography. Szapocznikow expanded the definition of sculpture in a deconstructive process of trial and error, while casting parts of her own body directly: an indexical imprint that testifies to the body’s deterioration.

This catalogue is published on the occassion of the exhibition Alina Szapocznikow: Body Traces at the Tel Aviv Museum of Art, February 7 - May 31, 2014.

Edited by Agata Jakubowska and Katarzyna Szotkowska. Translated by Jennifer Croft
Although she is only now just coming into much deserved global renown as the woman behind "Awkward Objects," one of ArtForum's Best of 2012, the Polish sculptor Alina Szapocznikow has long been recognized in her country as one of the most accomplished female artists of the twentieth century. Collected in this volume for the first time are Szapocznikow’s letters to and from the art critic and former director of the Lódz Museum of Art Ryszard Stanislawski, which span from the inception of their relationship through their marriage and divorce.
Lovely, Human, True, Heartfelt documents Szapocznikow’s artistic process and inspirations and is a rare window through which to view the complex internal life of Szapocznikow as an artist, Holocaust survivor, and woman. For art historians and enthusiasts, this correspondence offers an important context for understanding Szapocznikow’s often enigmatic work and id a fascinating look at the recovery of the artistic community in Europe after World War II. The volume includes comprehensive notes on the political and artistic climate surrounding each letter, as well as providing biographical information that creates an even more nuanced portrait of the two writers.
More than simply a historical resource, Lovely, Human, True, Heartfelt offers readers an intimate epistolary romance written with deep passion and remarkable literary flair.
ISBN: 9788393381869

A sculptor who began working during the postwar period in a classical figurative style, Alina Szapocznikow radically reconceptualized sculpture as an imprint not only of memory but of her own body. Though her career effectively spanned less than two decades (cut short by the artist’s premature death in 1973 at age 47), Szapocznikow left behind a legacy of provocative objects that evoke Surrealism, Nouveau Réalisme and Pop art. Her tinted polyester casts of body parts, often transformed into everyday objects like lamps or ashtrays; her poured polyurethane forms; and her elaborately constructed sculptures, which at times incorporated photographs, clothing or car parts, all remain as wonderfully idiosyncratic and culturally resonant today as when they were first made. Well-known in Poland, where her work has been highly influential since early in her career, Szapocznikow’s compelling oeuvre is ripe for art-historical reexamination. Alina Szapocznikow: Sculpture Undone, 1955–1972 offers a comprehensive overview of this important artist’s work at a moment when international interest is blossoming. Richly illustrated with over 150 color plates, the catalogue features essays that touch on key aspects of her practice and historical reception, as well as an extensive annotated chronology that provides an in-depth exploration of the intersection of her life and art. Working in one of the most rich and complex periods of the twentieth century, Szapocznikow responded to many of the ideological and artistic developments of her time through artwork that is at once fragmented and transformative, sensual and reflective, playfully realized and politically charged.

Alina Szapocznikow was born in Poland in 1926, and gained critical attention there for her early sculpture of the 1950s. She re-settled permanently in France in 1963, where her continued exploration of new materials such as polyester and polyurethane brought her into dialogue with the contemporary art scene of her time. She continued to push the boundaries of sculptural form and subject matter up until her premature death in 1973.

Alina Szapocznikow: From Drawing into Sculpture

One of the first to use materials such as polyurethane foam and polyester resin, Alina Szapocznikow (1926–1973) is a renowned artist in her native country of Poland, and has been the subject of increased interest in the U.S, following her 2012 touring retrospective. Though she is better known for her sculptures, Szapocznikow’s drawings are equally unique and fascinating. Felt-tip, ballpoint, crayons, ink, watercolor and monotype were her materials of choice in the medium. Forty years after her death, they are now being rediscovered by scholars and museums worldwide. The works showcased in this book reveal the depth of Szapocznikow’s fantasy, the originality of her reflections on the body, as well as highlighting her humor, sexuality and exuberance. These drawings reflect the distinctive style of an artist who can be considered an heir to the Surrealists and a precursor to the Pop movement.

Do artists travel away from or towards trauma?

Is trauma encrypted or inscribed in art?

Or can aesthetic practices – after-images – bring about transformation – that does not imply cure or resolution – of the traces – after-affects – of trauma, personal trauma or historical traumas inhabiting the world whose traces artists also process as participants in and sensors for our life-worlds and histories? How does the viewer, coming belatedly or from elsewhere encounter works bearing such traces or seeking forms through which to touch and transform them?

These are some of the questions posed by major feminist art historian and cultural analyst, Griselda Pollock, in her latest installation of the virtual feminist museum. In closely-read case studies, we encounter artworks by Gian Lorenzo Bernini, Ana Mendieta, Louise Bourgeois, Alina Szapocznikow, Anna Maria Maiolino, Vera Frenkel, Sarah Kofman and Chantal Akerman to explore trauma and bereavement, fatal illness, first and second generation Holocaust experience, migration, exile and the encounter with political horror and atrocity. Offering a specifically feminist contribution to trauma studies, and a feminist psychoanalytical contribution to the study of contemporary art, this volume continues the conceptual innovations that have been the hall-mark of Pollock's dedicated exploration of 'feminist interventions in art's histories'.

Griselda Pollock is Professor of Social and Critical Histories of Art and Director of the Centre for Cultural Analysis, Theory and History at the University of Leeds.

Andrea Rosen Gallery announces its representation of the Estate of Alina Szapocznikow.

This Fall, the gallery will present its first solo exhibition of her work, (October 31st – December 5th) with a meticulously chosen group of major figurative sculptures from the 1960s and 1970s, contextualized with drawings and works from the "Souvenir" series.

Alina Szapocznikow in THEM at Schinkel Pavillion

Alina Szapocznikow at the Tel Aviv Museum of Art