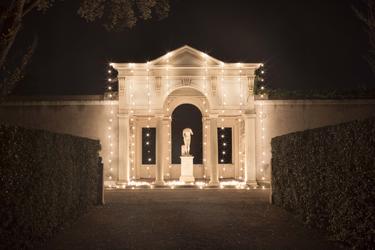 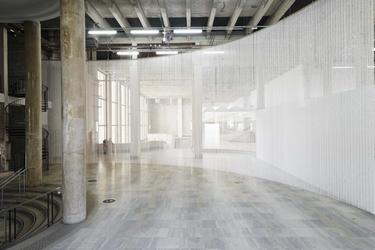 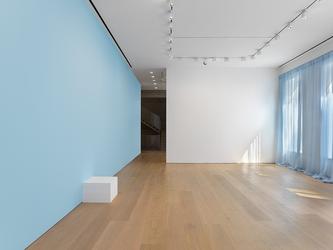 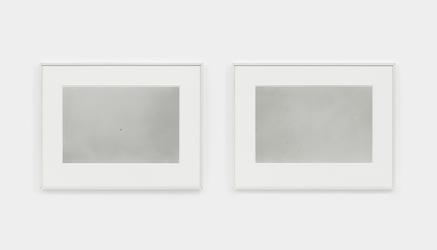 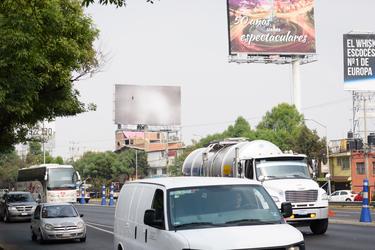 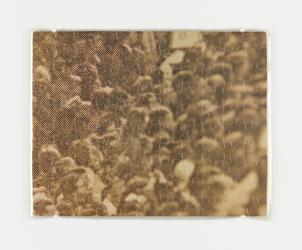 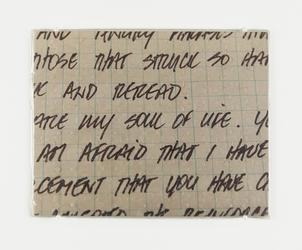 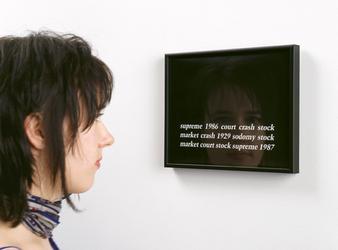 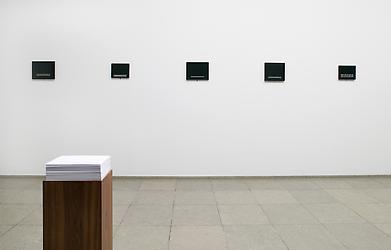 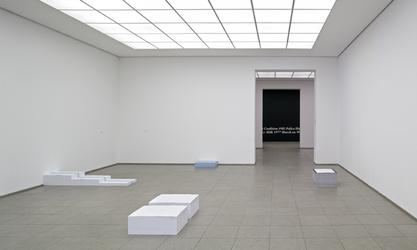 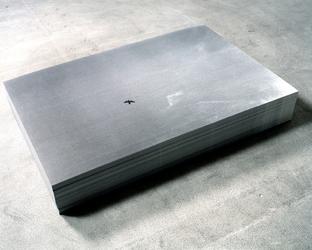 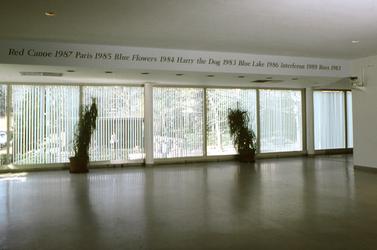 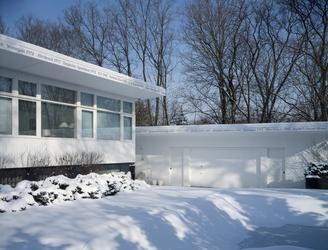 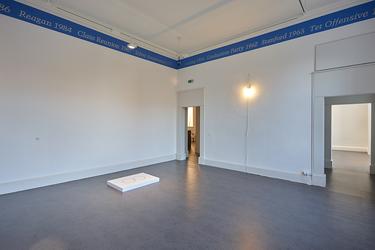 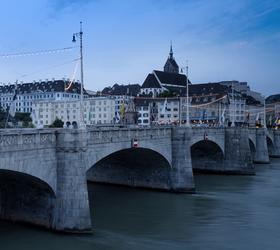 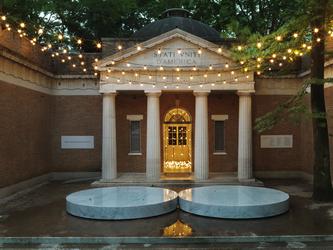 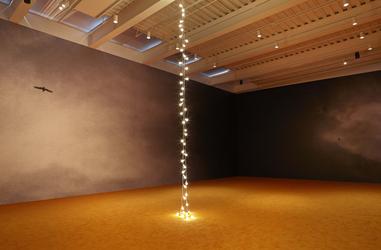 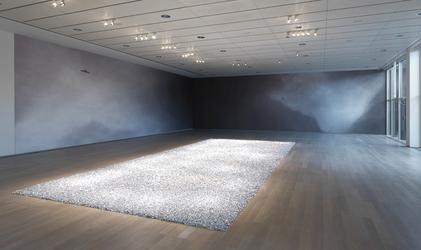 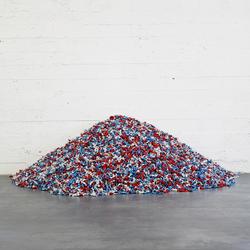 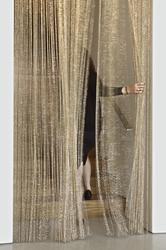 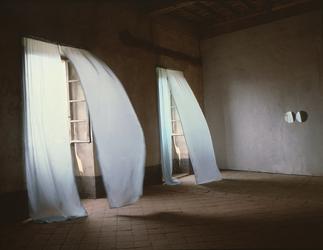 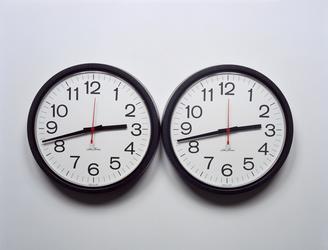 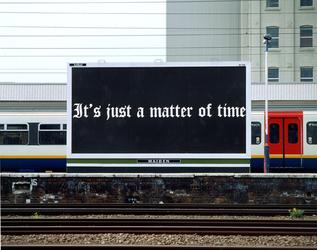 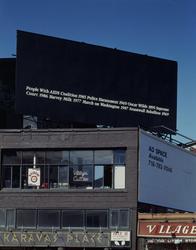 Throughout his career, Gonzalez-Torres’s involvement in social and political causes fueled his interest in the overlap of private and public life. From 1987 to 1991, he was part of Group Material, a New York-based art collective whose members worked collaboratively to initiate community education and cultural activism. His aesthetic project was, according to some scholars, related to Bertolt Brecht’s theory of epic theater, in which creative expression transforms the spectator from an inert receiver to an active, reflective observer and motivates social action. Employing simple, everyday materials (stacks of paper, puzzles, candy, strings of lights, beads) and a reduced aesthetic vocabulary reminiscent of both Minimalism and Conceptual art to address themes such as love and loss, sickness and rejuvenation, gender and sexuality, Gonzalez-Torres asked viewers to participate in establishing meaning in his works.

The third in a series of two-person exhibitons exploring Gonzalez-Torres' affinities with other artists
November 10 – December 20, 2006
Gallery 2

A Series of Rotating Installations

Every Week There is Something Different
May 2 – June 1, 1991
Main Gallery

Felix Gonzalez-Torres: Specific Objects Without Specific Form documents the groundbreaking exhibition curated by Elena Filipovic with Danh Vo, Carol Bove, and Tino Sehgal that traveled to WIELS, Brussels; Fondation Beyeler, Basel/Riehen; and MMK Museum für Moderne Kunst, Frankfurt in 2010 and 2011. Filipovic curated a retrospective at all three venues, evolving at each location. Midway through each exhibition, Filipovic's installation was removed or altered by one of the artists who was invited to completely reconsider and re-install their own version of the exhibition without any limitations. The result of this structure was a profound meditation on the role that ongoing change and renewal play in Gonzalez-Torres's work.
The book has been years in the making as Elena Filipovic and the Felix Gonzalez-Torres Foundation worked together to find the best ways to present the complexities and nuances of the exhibition. The book includes installation views of each version of the exhibition and an expansive illustrated checklist with images of each artwork in every instance of its installation. The book's structure allows the reader to see the immensely different ways the artworks can be installed as well as how context acted on and through each piece.
Format: Hardcover, 7.5 X 11 IN. / 664 pages / 595 color
Publisher: Koenig Books (February 28, 2017)
ISBN 9783863359737
To purchase Felix Gonzalez-Torres: Specific Objects Without Specific Form please email info@rosengallery.com.

Published on the occasion of the first museum presentation of Felix Gonzalez-Torres's work in Asia at PLATEAU, and Leeum, Samsung Museum of Art, Seoul, South Korea, June 21 - 28 Sept. 28, 2012

Felix Gonzalez-Torres lived and worked resolutely according to his own idealistic principles, combining elements of Conceptual art, Minimalism, political activism, and poetic beauty in an ever-expanding arsenal of media, including public billboards, give-away piles of candy and posters, and ordinary objects--clocks, mirrors, light fixtures--used to startling effect. His work challenged the notions of public and private space, originality, authorship and--most significantly--the authoritative structures in which he and his viewers functioned. Editor Julie Ault has amassed the first comprehensive monograph to span Gonzalez-Torres's career. In the spirit of his method, she rethinks the very idea of what a monograph should be. The book, which places strong emphasis on the written word, contains newly commissioned texts by Robert Storr and Miwon Kwon, an introduction by Susan Cahill and an extended conversation with fellow artist Tim Rollins, as well as significant critical essays, exhibition statements, transcripts from lectures, personal correspondence, and writings that influenced Gonzalez-Torres and his work. Ample visual documentation adds another important layer of content. We see works not just in their completed state, but often in process, which for Gonzalez-Torres could mean the process of disappearing as viewers interacted with them.

Published on the occasion of the retrospective exhibition at the Serpentine Gallery, London, June 1 –  July 16 2000.

Originally published to accompany the artist's solo exhibition at the Guggenheim Museum in 1995, and reissued on the occasion of the 2007 Venice Biennale (June 1-November 21), where Felix Gonzalez-Torres would represent the United States.

Written by Nancy Spector in close consultation with the artist and reflecting and expanding upon his ideas at the time, Felix Gonzalez-Torres presents a thematic overview of the artist's rich, many-layered practice, including the signature paper stacks, candy spills, light strings and billboards--and demonstrates his continued resonance today.

Nancy Spector is Chief Curator at the Guggenheim Museum, New York, and U.S. Commissioner to the 2007 Venice Biennale.

Published on the occasion of the traveling exhibition, Felix Gonzalez-Torres at The Museum of Contemporary Art, Los Angeles. April 24 – June 19, 1994. Co-organized by Amanda Cruz, Ann Goldstein and Suzanne Ghez; The Hirshhorn Museum and Sculpture Garden, the Smithsonian Institution, Washington, D.C.  June 16 –  Sept. 11, 1994.; The Renaissance Society at the University of Chicago, IL., Oct. 2 – 6 Nov. 6, 1994

Felix Gonzalez-Torres' work is currently on view at the Brooklyn Museum as part of the group exhibition Infinite Blue.  The exhibition runs until November 5, 2017.

Palais de Tokyo's "Carte Blance" to Tino Sehgal includes works by Felix Gonzalez-Torres. The exhibition is on view from October 12 through December 18, 2016.
For more information, please visit the institution's website.

The Felix Gonzalez-Torres exhibition at Andrea Rosen Gallery is reviewed on artforum.com.

Andrea Rosen Gallery is pleased to announce the inclusion of works by Felix Gonzalez-Torres, Andrea Zittel, and Wolfgang Tillmans in NYC 1993: Experimental Jet Set, Trash and No Star, currently on view at the New Museum through May 26, 2013.