There are more people alive today than have ever lived in all human history. Together, we are a new thing: a climate, a dimension, a plague, a god. If you believe in reincarnation; there are now more human beings than past souls to fill them, so everyone gets a second chance. If you believe in heaven and hell; both will shortly double in size. If you believe in neither; business goes on as usual, as all of the life that has gone before collapses into this moment. All the stories end and begin again today. But still the dead come back, they always come back. We live among their after lives.

You have felt them in a breath and seen them in clouds, walked through their dissolved bones and eaten them for breakfast. Sometimes they'll even figure out a way to talk to us. You know the routine, low moaning sounds, candles blown out and bathtubs filled up with blood. Screaming apparitions, bruised and gouged with bleeding eyeballs falling out of fractured skulls and snapped bones popping up through ruptured skin. We think they're trying to be scary, to freak us out. But they're just trying to talk to us; they don't have nice clothes and casual Fridays, they don't give a shit about appearances, they're dead. "This is how it is now", they're saying, "We're all fucked up over here! Yesterday we were just like you, snatching breath minute by minute, our reckless blood pumping away, a million stupid things on our minds."

It happens on a perfect day, as the stars fade towards an absolutely normal dawn. No miracles, no last minute premonition. The heart stops without warning, the wounds open silently, flowers to a quiet sun. The water closes over you, the weapon is always on target. The perfect murder, six billion witnesses and not one left alive to tell the tale.

What can you do? In this new body of work the narrative arc that Matthew Ritchie has been working on for the last several years seamlessly dissolves into an ‘information climate' where context and content are helplessly intermingled. Five large paintings, a hundred foot wall drawing and a floor work describe a strange, transformative cycle as a large drowning figure oscillates through phases of birth and death, shifting between the confining solidity of the shore and the murderously infinite possibilities of the sea.

'Games of Chance and Skill': a large-scale permanent installation will open at MIT on October 4, 2002.

Matthew Ritchie: More Than The Eye

Acclaimed in the art world for his room-size installations of paintings, sculpture, and digital projections, Matthew Ritchie’s work investigates architecture and the dynamics of culture. Named by Time magazine in 2001 as one of 100 innovators for the new millennium, his rich work draws from subjects as diverse as ancient myth and medieval alchemy to cutting-edge physics and contemporary politics. This artist-designed book will explore Ritchie’s large-scale artistic "interventions" in buildings designed by Morphosis among others, including the Guggenheim Museum and MIT.

Situated at the interaction of art, architecture, music, mathematics, cosmology and science, Matthew Ritchie's "The Morning Line" is a 33-foot high sound pavilion, constructed in aluminum and conceived in part as a successor to Edgard Varèse and Le Corbusier's pavilion for the 1958 World's Fair, and Fritz Bornemann's Expo '70 Pavilion. Designed in collaboration with New York-based architects Aranda Lasch, the Arup Advanced Geometry Unit and the Music Research Centre of York University, the structure was inspired by the cosmological theories of Paul Steinhardt and Neil Turok, and offered a sonic environment in which newly commissioned works by well-known musicians were performed. This survey of the project includes a book containing Todd Eberle's photographs of the structure, a poster, a newspaper and a red vinyl LP with music by contemporary electronica musicians such as Alexej Borisov, Tommi Grönlund, Petteri Nisunen, Christian Fennesz, Carsten Nicolai, Zsolt Olejnik, Finnbogi Petursson, Franz Pomassl, Terre Thaemlitz and Zavoloka.

In 1995, British artist Matthew Ritchie embarked on an extraordinary undertaking: he set out to tell the story of everything, from the Big Bang onward. His tale was to be told in paintings and drawings through a core group of 49 characters drawn from sources as diverse as mythology, quantum physics, alchemy, gambling, biblical tales, and pulp fiction. With Proposition Player, Ritchie's first major solo museum exhibition and accompanying catalogue, his narrative has reached a "climax, collapse, and crisis"--the story has morphed into a game and Ritchie has created a veritable information casino. Accompanying the paintings and drawings for which the artist is internationally known are works in new media, including a 100-foot-long three-dimensional drawing, an interactive craps table with digital animation that invites viewers to roll the dice for the future of the universe, an enormous rubble floor mosaic that invites viewers to walk into the heart of the piece, and a deck of cards featuring Ritchie's cast of characters.

Matthew Ritchie: Incomplete Projects 01-07 was originally published from 2000 to 2006 as seven separate volumes to record a diverse group of projects. Institutional acknowledgements and credits accompanied each volume. Half of each print run was preserved to be collected in this final edition.

We Want To See Some Light

Catalogue published in conjunction with the exhibition "We Want to See Some Light," July 9 - August 21, 2005, at Portikus im Leinwandhaus, Frankfurt am Main. It is the seventh volume in a multi-part series titled Matthew Ritchie, Incomplete Projects.

Published in conjunction with Two Palms Press, 2004. It is the sixth volume in a multi-part series titled Matthew Ritchie, Incomplete Projects.

Games of Chance and Skill

Catalogue published in conjunction with the permanent installation Games of Chance and Skill (2002), commissioned by the MIT Perecent for Art Program for the Albert and Barrie Zesiger Sports and Fitness Center on the Massachusetts Institute of Technology campus in Cambridge, Massachusetts. It is the fifth volume in a multi-part series titled Matthew Ritchie, Incomplete Projects.

Catalogue published in conjunction with the Edition for Parkett 61, November 5, 2001:

MATTHEW RITCHIE
The Bad Need
2001
adhesive-backed vinyl and acrylic paint
36 x 41 inches (92.08 x 105.41 cm)
Edition of XVIII
Accompanied by a certificate of authenticity in the form of a signed and numbered artist's book.

Catalogue published in conjunction with the Edition for Artists Space:

Catalogue published for the exhibition "Concentrations 38: Matthew Ritchie," organized by the Dallas Museum of Art, and curated by Suzanne Weaver, January 23 - April 21, 2001. It is the second volume in a multi-part series titled Matthew Ritchie, Incomplete Projects.

Catalogue published for the exhibition "Matthew Ritchie," organized by the Museum of Contemporary Art, North Miami, and curated by Bonnie Clearwater, March 31 - June 25, 2000. It is the first volume in a multi-part series titled Matthew Ritchie, Incomplete Projects.

Behold a stunning world, composed largely of water, where clothing changes people's behavior and time itself can be worn and discarded like cloth. Witness a father who takes his two boys out to sea, in flight from some menace at home, thus launching their adventures in a strange and dangerous territory. Artist Matthew Ritchie's striking images blend scientific diagramming with vivid, colorful renderings of the apocalypse, while writer Ben Marcus's cold prose plumbs the inner workings of two boys caught out at sea with a father whose costumes grow increasingly menacing. In this collaborative work, Ritchie's and Marcus's shared obsessions of mythology, physics and ancient texts have produced a conjunction of text and image in which people themselves are merely costumes for the darker needs that drive them.

Published on the occassion of the exhibition "Mythopoeia: Projects by Matthew Barney, Luca Buvoli and Matthew Ritchie," curated by Jill Snyder. Presented at the Cleveland Center for Contemporary Art, Cleveland, Ohio, February 12 - May 2, 1999. 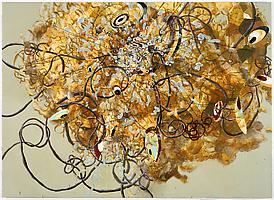 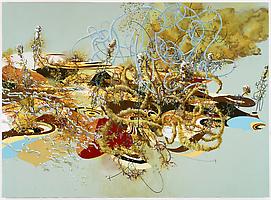 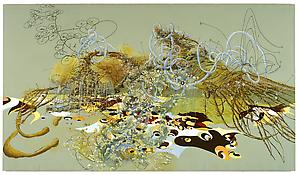 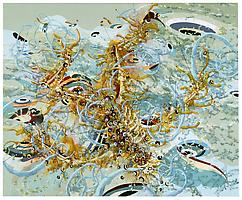 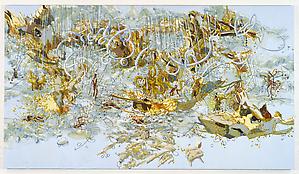 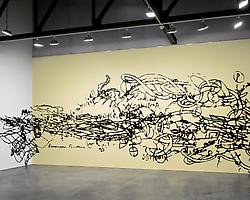